One Lord, One Faith, One God

St Andrew's Church is a fairly modern building, there are no steeples, spires or towers to look for.  It stands in Church Road Walthamstow.  Church Road is a small road off St Andrews Road in Higham Hill.  Opposite the church  a new housing development has recently been completed.

The Parish is bounded, approximately, by the North Circular Road to the north, Forest Road to the south, Blackhorse Road to the west and Chingford Road to the east.  It has a population of about 15,000.  Due to the type of housing in the area much of the the population is transitory.  Folk tend to buy the smaller properties and then as the families expand move on.  A high percentage of the local residents are of other faiths and many different languages are spoken in the vicinity.  This is a diverse area in a constant state of change.

Within a mile of the church, in the High Street is Walthamstow Market.  This is reputed to be the longest market in Europe and dates from 1885.  It is a very busy and bustling market with about 450 stalls selling everything from greengrocery to clothing to almost everything else.  It opens six days of the week from eight in the morning.  The High Street also has about 300 shops.

Although most of the residents live in houses there are several blocks of flats, the largest of which is Priory Court. There is a lot of housing development around Blackhorse Road Station presently, some occupied, some still being built.  The area is well served by public transport with several bus routes.  At the top end of the market is found a bus station and terminus plus Walthamstow Central Railway Station . This station is both surface -- the Chingford to Liverpool Street line -- and underground. Blackhorse Road underground station is a short distance away.  Both underground stations are on the Victoria line.

There are several schools nearby, both primary and secondary.  We have strong connections with both Hillyfields and Whittingham Primary Schools.  Pupils have visited the church during the school day as part of their lessons on religion and our Minister visits the schools to participate in assemblies from time to time.

The Vicarage is situated in Sutton Road, and is owned by the Diocese of Chelmsford.  It is a large well proportioned house with five bedrooms, a study and all the usual rooms.  It is heated by a gas central heating system.  An intruder alarm is installed.  It has a driveway and garden at the front and a large garden to the rear.  The Vicarage is within a ten minute walk of the church. 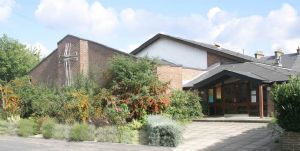